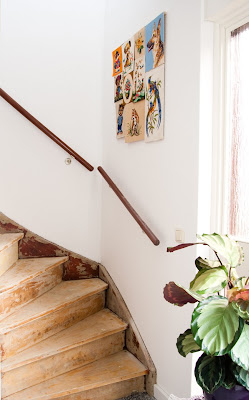 Molly is the sweetest cat on earth. I’m certain I wrote this a thousand times before, but it’s just the one and only truth for me (like it is for every other cat owner).

Let me start by explaining why.

I’ve been changing the arrangement of the embroideries for my wall panel again and again and finally became satisfied with the result. I attached the top four embroideries with a tacker to a wooden lath and attached the other embroideries to those four, using some strong thread and a big, sharp needle (punctured about every finger on both my hands). If you’d like to make something like this yourself keep in mind that some embroideries need to be tightened at the back with a piece of cardboard and thread, to keep them in the right shape. 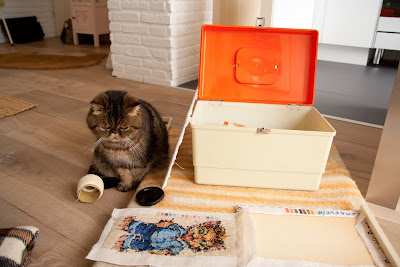 During this project, I was sitting on the ground (which became, by the way, very uncomfortable, along with the punctured fingertips ;-)) and where I am, Molly is. She sat next to me, watching what I was doing. Cat’s have a strange need of attacking imaginary enemies though, and all of a sudden she discovered the thing she needed to attack..underneath my project. Have you ever tried to sew something together when a cat keeps jumping upon it?

There’s no other creature on this earth that’s allowed to jump on my embroidered wall panel, bed or kitchensink. But Molly can. She made me laugh so loud, it made my stomach hurt. That’s exactly why we love her so much. She is so darn cute, we could eat her. 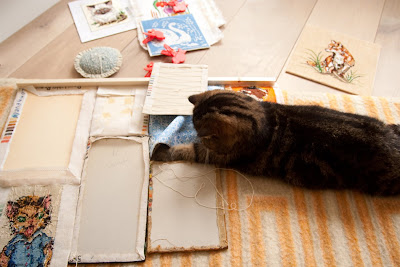 Top picture: the finished wall panel… with the stairs that still need some finishing (which is of course the understatement of the century).

I’ll try to shoot some more detailed photo’s of the front and back and write a little tutorial about this one.
What do you do with your thrifted embroideries? 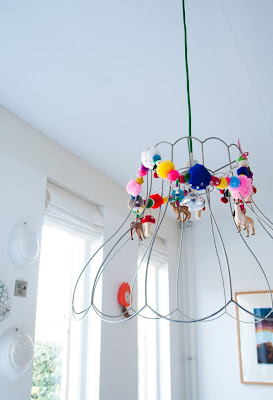 It’s so funny how almost everybody, after celebrating the holidays, sighs “The first thing I did was getting rid of all those decorations in our home, out with the tree, in the tidy and space again.” I did exactly the same. At once, mostly right after Christmas, I get fed up with everything holiday-related in our home. I often wondered why, because I love this season and Christmas should last longer than two days in my opinion. That brought me to the following theory.

I’m often a bit cranky when I realise those cosy Christmas days are over already. That we have to wait another year (a long, blank year, with Summer heat and who knows what else) before we can cuddle up and celebrate again. So I guess that discontent makes me take it out on the decorations. It’s just like real-life. When you’re not feeling well, you mostly take it out on the ones you love. For you know they’ll forgive you for doing that (well..most of the time ;-)).

But there’s glimmer at the horizon (oh my, I’m getting poetic too!). Tidying up does not mean there’s no room for new colourful, gleeful home decor. So after banning the Christmasornaments to the attic (for which I hope they will forgive me), I started to make a garland for the stripped lampshade in the kitchen.

I used pompoms I bought ages ago at Hema and some big wooden beads and threaded them to a long piece of fishing wire. I added some felted toadstools and some plastic animals for a whimsical touch. To attach the animals to the garland, I wrapped a piece of wire around their bellies and threaded some beads and plastic flowers to those too. The end of the wire can be used to attach them to the garland. It’s easy and fun and it will make you smile everytime you pass by. And isn’t that exactly what we need after leaving the holidays behind us and start on our journey through another new year? 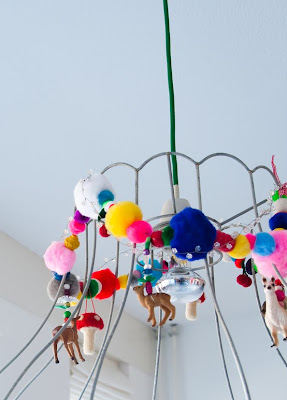 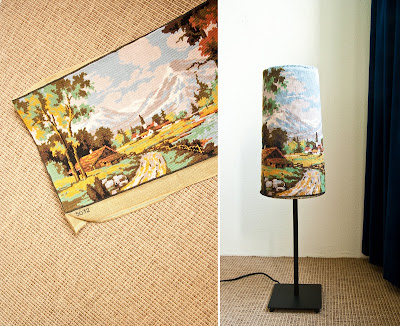 Glue…I’m not a big fan of it. Especially not after my lampshade-upholstery-adventure (I’m not even sure that’s an actual English sentence.)
I used spray adhesive to upholster a lampshade with the vintage needlework above, but ended up stitching the shade to the frame by hand, because the glue thought it necessary to stop holding things together after one night. Still, it was a fun project and I actually love the result! If you ever have plans to re-cover a lampshade, take a look at this tutorial. One important thing I disovered (hmm…this sounds like I’m a die-hard lamp-upholsterer, harhar): I used a Skimra lampshade from Ikea to glue (stitch) the landscape on. Problem is that their frames aren’t made of one piece, so you end up with two loose pieces of frame that don’t make your work much easier when adding the shade back to the frame again. It’s just a small thing to bear in mind…to keep you from bursting into tears and tear off your hair…like I almost did…;-D
Coming up next: a much easier Summerproject: painting a wooden apple. Easy as pie.
https://www.ohmarie.nl/wp-content/uploads/2016/10/logoohmariehr.jpg 0 0 Marlous https://www.ohmarie.nl/wp-content/uploads/2016/10/logoohmariehr.jpg Marlous2010-08-12 11:04:002015-03-10 15:33:28It's what (should) holds things together 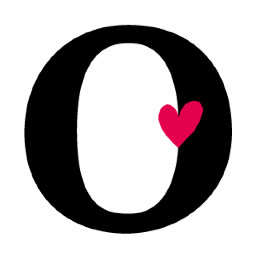 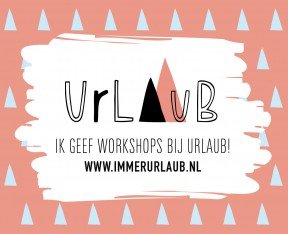